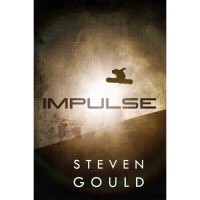 The was a fun novel that continues the story line that was begun in Reflex. This one was a much more seeming YA read rather than the previous two which, IMHO, were both adult novels though this did not lessen the enjoyment that I got from this. This is (mostly) the story of Davy and Millie's child (named Cent, short for Millicent)and her entry into the real world after being kept apart in hiding by her parents for her life up to the story told in this book. We see her develop and enhance the teleportation talent bequeathed by her parents as she deals with teenage problems from her entry into high school.

Beyond the Shadows by Brent Weeks